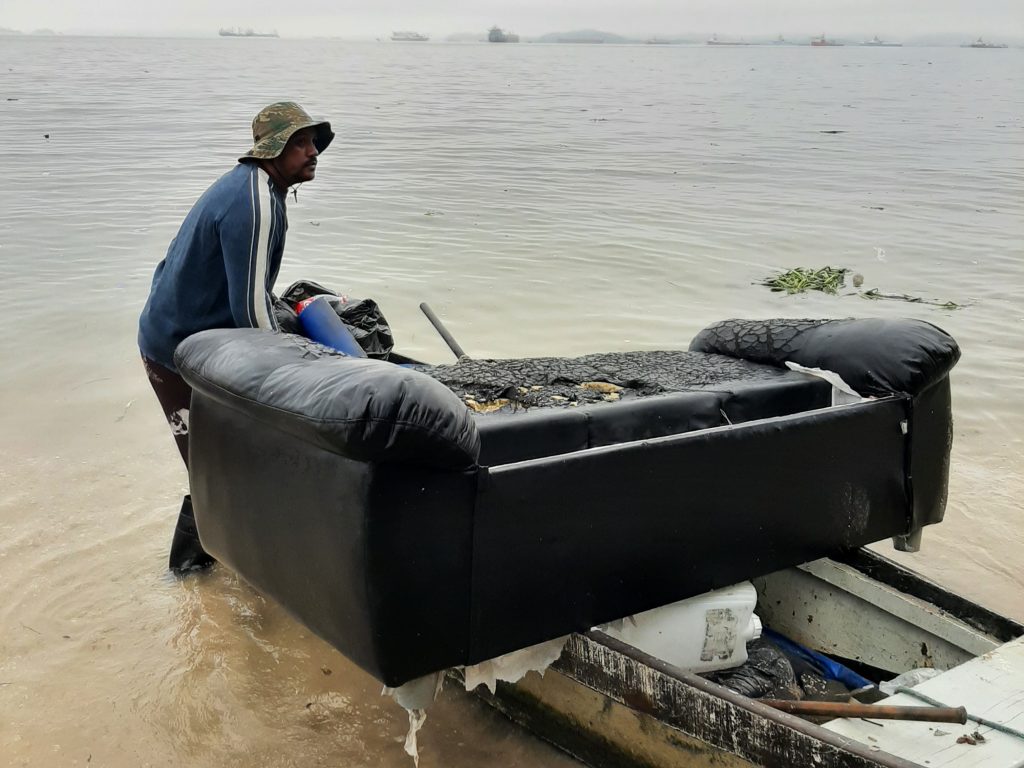 Sofas bogged down in the mangroves of Guanabara Bay; a look into Rio’s seacoast swamped with mattresses and upholstered furniture 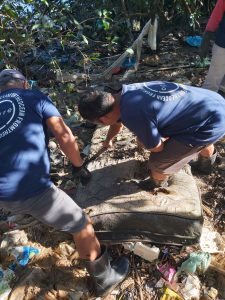 Fishers are pulling an astonishing amount of upholstered furniture from the mud as they look for recyclable materials.

Following the work of our project ‘Fishing for litter in Guanabara Bay’, one concern comes to the fore. We have been surprised by the amount of sofas, armchairs, mattresses and upholstery being removed from the mangroves by fishers from the Bancários and Z-10 fishing villages, both on Ilha do Governador, in the city of Rio de Janeiro, Brazil.

“It was hard to believe the first time I saw a pair of fishers swinging a sofa on a rowing boat. I wondered how a sofa ended up in Guanabara Bay. Today, unfortunately, the scene of a fisher bringing a sofa is common; every day we collect at least one sofa, and there have been days when we collected four.” comments BVRio circular economy specialist Pedro Succar.

It is astonishing how much upholstery is dumped in the sea, from armchairs to huge sofas. Removing them is a task that requires a collective effort and the strength of experienced fishers since they are found bogged down and often stuck to the mangrove vegetation. To remove them, the fishers first dismember the sofa with machetes, with the mangrove mud up to their knees. The weight is multiplied with the upholstery soaked in water, sand and soil, requiring a team to first free them from the mud, then to put them on the boat and carry out the transportation of this sometimes risky job. 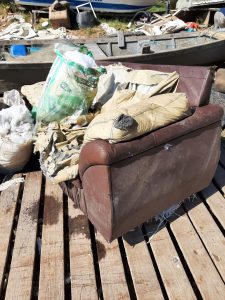 Arriving on dry land, another team joins in to help unload the catch. The upholstered furniture is left on the mooring ramp, on the beach edge, so the water can run off while they remove the rest of the waste from the boats. The larger sofas are the last in the cleaning process, squeezed to drain as much water as possible to be taken for weighing. With the help of five to six people, furniture and waste are attached to a hook and hoisted into a huge weighing bag.

The way out to sea

It’s hard not to wonder why so many sofas end up bogged down in the mangroves of Guanabara Bay. “I don’t believe anyone would throw a sofa into the sea. It’s not likely that these sofas have been dumped in the sea; the mangrove swamp is just the end point of a long road.” explains Pedro.

The sofas likely arrive through Guanabara rivers and canals, many of which are heavily polluted and silted up by the intense process of uncontrolled urban growth in the Rio de Janeiro Metropolitan Region. Guanabara rivers have suffered degradation to a greater or lesser extent, including drastic interventions, such as the straightening of the courses, which accelerates the current and contributes to the sediment dragging. Others, like the river Macacu, still maintain sufficient quality for public supply (Instituto Baía de Guanabara). 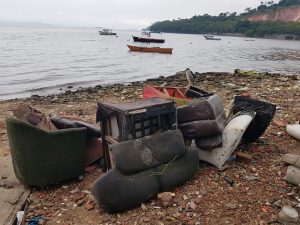 Unfortunately, it is an everyday practice to dump large amounts of waste on Rio’s streets. The heavy rains and recurrent floods, resulting from the silting up of the rivers and degradation of the vegetation, drag this waste down the rivers to Guanabara Bay, where it gets stuck in the mangroves. When the tide is low, these heavy pieces of furniture bog down.

The circular economy is crucial to increase the lifespan of upholstered furniture, either through environmental education of the population for correct disposal (donation or free removal service of disused goods), or for the reuse of furniture and upholstery materials by the industry.

Next time, we will look closely at the mountain of flip-flops and shoes removed from the sea in Guanabara Bay.