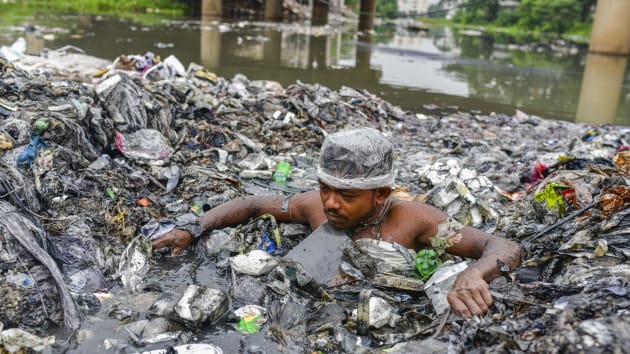 ENORMOUS AMOUNT OF PLASTIC WILL FILL OCEANS, LAND BY 2040 EVEN WITH IMMEDIATE GLOBAL ACTION, REPORT SAYS

More than 1.3 billion tons of plastic waste will flow into the world’s oceans and land over the next two decades without widespread intervention, according to a group of scientists who developed a new computer model to track the flow of global plastic pollution.

Single-use plastic has surged in production in recent decades, filling up oceans and land with waste and overwhelming the capability of waste management systems across the world to dispose of and recycle the plastics.

While a global effort to curb plastic consumption and pollution could mitigate pollution by roughly 80%, even under a best-case scenario for global action, about 710 million metric tons of plastic will be dumped into the environment by 2040, according to a new report, “Breaking the Plastic Wave”.

“This scientific inquiry has for the first time given us a comprehensive insight into the staggering amounts of plastic waste that are being dumped into the world’s terrestrial and aquatic ecosystems”, Costas Velis, a lecturer at the University of Leeds in the U.K. and an author of the report, said in a statement.

“We now have a much clearer picture of the sources of the pollution and where it eventually ends up”, Velis said.

The rise in single-use plastic, which is projected to increase by 40% in the next decade, has become more problematic during the coronavirus pandemic, with states and countries turning away from reusable products and municipalities scaling back recycling operations due to health concerns.

Plastic waste flowing into the oceans every year is projected to more than double by 2040, according to researchers, killing more marine life and entering the human food chain. Most aggregate plastic packaging is used only once and then thrown away, with the biggest source of pollution coming from municipal waste from households.

A major concern is the extent of plastic waste that is openly burned. While burning curbs the amount of plastic being dumped into the ocean and seas, the process releases planet-warming greenhouse gases as well as toxic cancer-causing substances such as dioxins, mercury and styrene gas that is detrimental to human and animal health.

“Burning is a double-edged sword. It reduces the amount of plastic that could eventually end up in the seas and on land but it also poses many other environmental problems, including a significant contribution to global warming,” said Ed Cook, a researcher at the University of Leeds and an author of the study.

China, Indonesia, the Philippines, Vietnam and Thailand contribute the most plastic waste into oceans, according to a 2015 report from the Ocean Conservancy. China is the biggest producer of plastic pollution globally.

Researchers said that waste collection is the most important way to reduce pollution, but emphasized that there’s no one solution to mitigating plastic pollution. The report urged a dramatic change to the global plastic supply chain to curb the influx of plastics into the environment.

A combination of cutting plastic production and consumption, replacing plastic with paper or compostable products, creating recyclable products, expanding waste collection capacity around the world and curbing waste exports could reduce plastic flow into the oceans by 80% of the level projected for 2040, the report said.