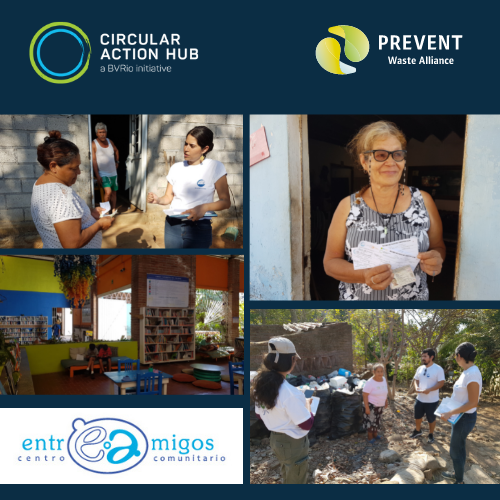 BVRio was in Mexico last month, between the 21st and 25th February, to support a circular economy network registered in the Hub’s project directory, composed of four community associations and several autonomous waste pickers. Maria Accioly, BVRio’s circular economy specialist, accompanied the proceedings of SGS Audit to the project, which is coordinated by the NGO Entreamigos, under the umbrella of ‘Bahia Circular – Community plastics recycling in Mexico’.

BVRio has partnered with the network under the financial support of PREVENT Waste Alliance, a partnership that has benefited an estimated 70 people, who received their first Circular Plastic Credits last December, a payment made by PREVENT.

The team visited 15 villages in the municipalities of Bahía de Banderas, Compostela and San Blas, all in the state of Nayarit (Mexico) with the objective to carry out an ‘eligibility assessment’ to the Principles and Criteria of the Circular Credits Mechanism (CCM), as well as a ‘quantitative assessment’ of the project’s impact.

Four organisations went through the assessment: the coordinating NGO for the network, Entreamigos in San Pancho; two civil society organisations, Vida Verde in Lo de Marcos and Sayulita Sonriente in Sayulita; and the the sorting center that buys recyclables from all the collectors, Las Palmas Collection Center, located in Las Varas.

“We feel a sense of pride in making possible the payment for environmental services to waste pickers who are unlikely to qualify for a stricter credit programme, fostering the development of this and other networks and kick-starting their participation in new projects”, highlights Maria about the audit’s proceedings.

Virginia Morales, Monitoring and Operations leader at Entreamigos said that “the auditing has been a crucial part of the project, as it has allowed us to make visible our strengths, as well as the areas where we can improve. We believe the audit leads us to improvements and growth, not only as a team, but as a project so that the impact on the community and on the planet is greater and clearer”.

Maria explains that the audit provides a broad analysis of legal, operational, socio-economic and environmental aspects. “In this particular case, it was very challenging because it is a regional network with a great diversity of contexts and actors – most of them informal. On the other hand, it was very rich for BVRio, because we learned a lot about the local reality and this brought valuable knowledge to leverage improvements and adaptations in the monitoring processes,” she emphasised.