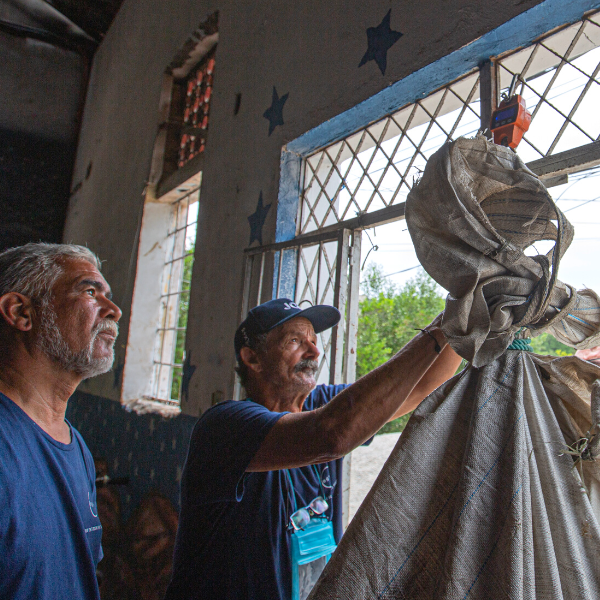 Since April this year, the second phase of our ‘Fishing for litter’ project has been supporting 25 families from Ilha do Governador, in Rio de Janeiro, Brazil, to remove waste from Guanabara Bay. To show the development of this social and environmental work, we will publish a series of articles containing further details of, and stories from this initiative. In this first piece, we will look at how much waste and what kind of materials have been ‘caught’ so far. 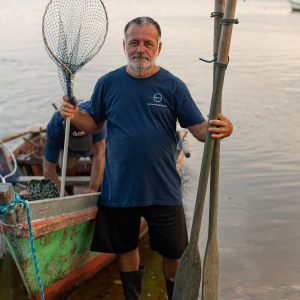 “Virtually, you can’t catch any fish from the sea. The fishers go out and, when they are back, they can’t even pay for the boats’ fuel costs. The project is providing a vital livelihood for them because, in addition to the environmental benefits, it has a significant social component.”

By the start of August, four months had passed since the beginning of the second phase of the project ‘Fishing for litter in Guanabara Bay’, carried out by BVRio in partnership with the Italian social enterprise Ogyre. Designed to last 12 months, the fishers have collected more than half of the established solid waste target for this project phase: almost 53 tonnes of the 100-tonne target have already been removed from the sea and mangroves (graph 1). Twice a week, 20 fishers leave early in the morning in 10 of their traditional fishing boats and return around lunchtime, having collected an average of 1,374 kg per day, 38% over the target. 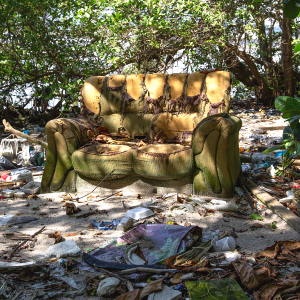 The types of waste collected are quite varied. The fishers collect from small plastic objects, which only weigh a few grams, to heavy pieces of furniture, such as sofas and beds. When returning from the sea, the waste is sorted, weighed, photographed and registered with the KOLEKT app, together with the help of the local communities (Colônia Z10 and Bancários Beach in Ilha do Governador). Using the app is crucial to give and maintain the transparency of the whole process and to build trust with the project’s funder that, even from another country, can follow everything online. The app also facilitates tracking, monitoring and analysis. 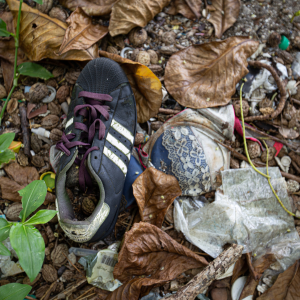 With KOLEKT, it is easy to check the distribution of the collected waste by type of material. Graph 2 shows that foams and flip-flops are the most commonly found items in the catch, representing 40% of the amount of waste collected. Foams are derived from sofa upholstery, cushion remains and mattresses dumped offshore. Flip-flops and shoes generally are found in excessive quantities, which will be a specific topic covered in this series. 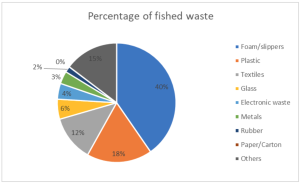 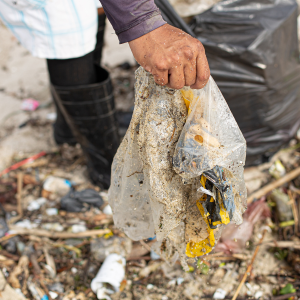 Plastic waste and its great variety of shapes, sizes and rigidity were not the most commonly collected materials, but the third, around 18% of the total waste managed so far. Despite the high consumption and disposal of plastic in the environment, the recycled plastic percentage is still low.

The plastic waste collected by the fishers in Guanabara Bay is often filthy and degraded, which shows the gravity of the problem. The plastic in the ocean gradually decomposes, making it hard to catch. The more time it remains in the water, the more it breaks down until it turns into micro fragments.

Textiles (excluding foam), for their part, represent 12% of the waste collected. Nonetheless, synthetic fabrics, such as polyester and nylon, are also derived from plastic and release micro-plastic particles into the seas. The fashion industry should urgently take action to manage its environmental impacts since the current overproduction of clothing contributes directly to the pollution of the oceans.

“Often, we don’t realise the impact when it’s far off. Seeing this work up close, for me, born in Rio, and for BVRio, created here, is understanding that we are carrying out a project with a real global impact on the ocean.” 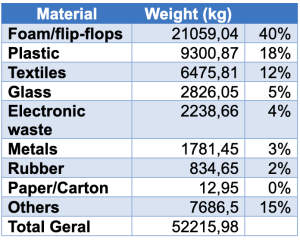 The fishers also recovered glass, electronic waste, metals, rubber and other materials (Table 1). The community has put a lot of effort into classifying the waste since many of the finds are made up of multiple materials. Items classified as ‘others’ have an equivalent proportion of various materials, such as sofas, composed of fabric, foam, wood, iron, plastic, etc. Astonishingly, the fishers find sofas every day. 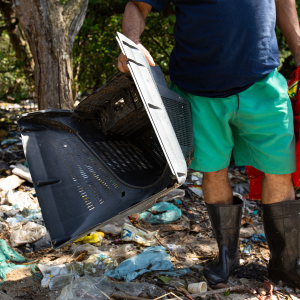 A future article in this series will narrate the difficulties and dangers of fishing for these large types of waste, abundant in Guanabara Bay. Don’t miss out.